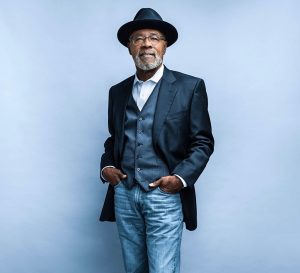 A native of Morgan City, Smith began writing poetry while simultaneously building a successful career as a public administrator and a banker. He now teaches English at Southern University in Baton Rouge, in addition to regularly publishing new works of poetry. Since 2007, he has directed Education’s Next Horizon, a non-profit policy advocacy organization dedicated to improving public education in Louisiana.

Smith is a fellow of the prestigious Cave Canem program and has four published collections of poetry: Muhammad’s Mountain (Lavender Ink, 2018), Spirits of the Gods (UL Press, 2017), Soul Be A Witness (MadHat Press, 2016), and A Mandala of Hands (Kelsay Books – Aldrich Press, 2015). His fifth collection, Our Shut Eyes, is forthcoming from MadHat Press.

Smith’s poems have appeared in numerous literary journals across the country, including Ploughshares, Callaloo, North American Review, and Missouri Review, and he is the winner of the 2019 Linda Hodge Bromberg Poetry Award. Much of his poetry draws upon African American history and his personal experiences of growing up and living in the South.

About the Poet Laureate process

According to selection guidelines, nominees must have published works in books, anthologies, literary journals or magazines. In addition, the selection committee must seek information from the general public and the literary community. The committee must select nominees who reflect the diverse cultures and heritage of Louisiana.

Under state law, the LEH is charged with overseeing the poet laureate nomination process. This year’s panel included Bedell along with LEH President/Executive Director Miranda Restovic; Darrell Bourque, PhD, former poet laureate and professor emeritus at University of Louisiana at Lafayette; Jessica Faust, poetry editor of the Southern Review; Ava Leavell Haymon, former poet laureate and a published poet;  Laura Mullen, the McElveen Professor in English at Louisiana State University;  Sheryl St. Germain, director of the Master of Fine Arts program in Creative Writing at Chatham University and a published poet; and Erin Greenwald, vice-president of content at the LEH.

The Poet Laureate will be available for public programming, including readings, workshops and lectures, at venues across Louisiana during his tenure. For sites that wish to host the Poet Laureate, please contact Christopher Robert at (504) 620-2639 or robert@leh.org.