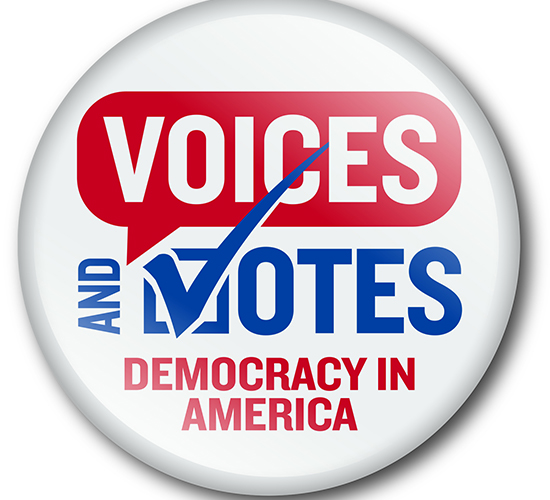 The Smithsonian Institution and the Louisiana Endowment for the Humanities have partnered to bring a tour of the powerful Museum on Main Street exhibition Voices and Votes: Democracy in America to Louisiana in April 2022 for a yearlong tour with stops at six sites, ending in January 2023.

Information about the exhibition can be found below. Applications to host Voices and Votes are now closed.

When American revolutionaries waged a war for independence they took a leap of faith that sent ripple effects across generations. They embraced a radical idea of establishing a government that entrusted the power of the nation not in a monarchy, but in its citizens.

Voices and Votes is based on a major exhibition currently on display at the Smithsonian’s National Museum of American History called American Democracy: A Great Leap of Faith. The traveling Voices and Votes exhibition has many dynamic features, including historical and contemporary photos; educational and archival video; engaging multimedia interactives with short games and additional footage, photos, and information; and historical objects like campaign souvenirs, voter memorabilia, and protest material.

This marks the 10th time that the LEH has partnered with the Smithsonian Institution and Louisiana communities to host a Museum on Main Street tour. Additional information about Voices and Votes is available at museumonmainstreet.org/VoicesVotes.

Voices and Votes in Louisiana

The 2022–23 Voices and Votes: Democracy in America tour in Louisiana is the centerpiece of a statewide initiative by the LEH focusing on civic engagement, and asks Louisiana residents to think critically about questions such as:

The grant amount is $4,000 per site, and cost share is required.

On Wednesday, September 29, at 7 p.m., join the Louisiana Endowment for the Humanities in welcoming Louisiana’s newest poet laureate, Mona Lisa Saloy, at her inaugural reading in the post.

PRIME TIME Spark Boxes are on their way to 29 agencies chosen to deliver the boxes to families in their communities. PRIME TIME Inc. received requests for more than 1,800 boxes from 49 organizations throughout the state during the two-week application period.